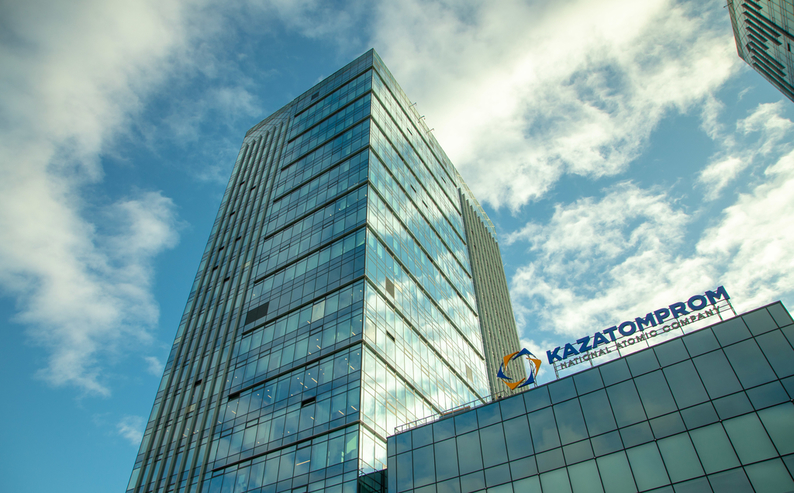 JSC National Atomic Company “Kazatomprom” (“Kazatomprom” or “the Company”) is pleased to announce the following planned changes to the Company’s senior management team, subject to final internal and Board of Director approvals, as per corporate governance procedures.

Meirzhan Yussupov has resigned from his role of CFO and Member of the Executive Board, as he was appointed as a Deputy Minister with the Ministry of National Economy of the Republic of Kazakhstan. Mr. Yussupov has made numerous contributions to the success of the Company, particularly during the privatization through its initial public offering (IPO) in 2018.

Kamila Syzdykova, Managing Director of Economics and Planning, has been promoted to the role of CFO. Mrs. Syzdykova, who has previously worked in the local and international uranium industry, including Kazatomprom and its subsidiaries, for over 10 years, played a key role throughout the IPO and is closely involved in the Company’s transformation and digitization projects, including the implementation of SAP ERP and a shift to digital business practices.

Baurzhan Ibrayev, Kazatomprom’s CNFCO and Member of the Executive Board, is reaching Kazakhstan’s retirement age of 63, and will retire effective 01 January 2021 following a long and decorated career as a physicist and nuclear fuel cycle expert. After joining Kazatomprom in 2001 and taking on various leadership and technical positions at several of Kazatomprom’s mining and technical research subsidiaries, Mr. Ibrayev was appointed as Chief Operations and NFC Officer in 2015. The Company wishes to thank Mr. Ibrayev, not only for his work at Kazatomprom, where he helped build up the Company to its world-leading position in the uranium market, but for his overall contributions to the advancement of science and the nuclear industry in Kazakhstan.

Riaz Rizvi will complete his contract with Kazatomprom as CCO and Member of the Executive Board at the end of 2020, and will be stepping down from his position and leaving the Company at that time. The Company thanks Mr. Rizvi for applying his expertise to the development of the new long-term strategy of Kazatomprom, and the establishment of a strong and commercially-focused marketing, sales, and portfolio management team. His guidance was instrumental in the formation of the Swiss-based trading subsidiary Trade House KazakAtom (THK), the asset restructuring program, and the Company’s IPO. Through these initiatives, Kazatomprom is now recognized as a market-centric organization, operating on the values of transparency, customer focus, and long-term value creation.

Askar Batyrbayev, who has been with the Company and its subsidiaries since 2006 and is currently Managing Director of Sales, will be promoted to the CCO position. Mr. Batyrbayev, with his experience in uranium marketing, sales, logistics, and subsidiary operations, will be a strong addition to the Company’s management team.

Birzhan Duisembekov, Kazatomprom’s CSDO and Member of the Executive Board, has taken an educational leave to pursue a Master’s degree in Management from Regent’s University London. Yerlan Tuleugozhin, currently Managing Director of Asset Management and Investments, will be acting as interim CSDO while Mr. Duisembekov is away. Following a 15-year career holding various positions at several companies in the Samruk-Kazyna group, Mr. Tuleugozhin joined JV KATCO LLP in 2018 as Deputy Executive Director for Finance, moving to his current role with Kazatomprom in 2019.

In addition, Marat Yelemessov, Kazatomprom’s Managing Director of Legal Support and Risks, will be joining the Company’s Executive Board, starting in January 2021. Mr. Yelemessov has more than 10 years of international legal experience in Kazakhstan’s public service and in the private sector, including the last two years holding senior roles in Kazatomprom’s legal and risk department.

“We would like to wish our departing colleagues the best of luck in their future endeavours,” said Galymzhan Pirmatov, Kazatomprom’s Chief Executive Officer, “and would like to thank each of them for their extensive contributions to the financial, commercial, and technological success of Kazatomprom, and to the advancement of the nuclear fuel cycle in Kazakhstan. I would also like to extend a warm welcome to the experienced and talented employees joining our senior management team. The appointments have been discussed for some time under the Company’s succession plan; their expertise will benefit all stakeholders, and it will be a valuable asset to Kazatomprom as we continue building a strong, resilient and successful company.”

Following the above changes, as at 01 January 2021, Kazatomprom’s senior management team will consist of:

Full biographies for the new members of the management team will be made available on the Company’s website, www.kazatomprom.kz, as the departures and promotions occur.

Kazatomprom is the world's largest producer of uranium, with the company’s attributable production representing approximately 24% of global primary uranium production in 2019. The Group benefits from the largest reserve base in the industry and operates, through its subsidiaries, JVs and Associates, 26 deposits grouped into 14 mining assets. All of the Company’s mining operations are located in Kazakhstan and mined using ISR technology with a focus on maintaining industry-leading health, safety and environment standards.

Kazatomprom securities are listed on the London Stock Exchange and Astana International Exchange. As the national atomic company in the Republic of Kazakhstan, the Group's primary customers are operators of nuclear generation capacity, and the principal export markets for the Group's products are China, South and Eastern Asia, Europe and North America. The Group sells uranium and uranium products under long-term contracts, short-term contracts, as well as in the spot market, directly from its headquarters in Nur-Sultan, Kazakhstan, and through its Switzerland-based trading subsidiary, Trade House KazakAtom AG (THK).For more information, please see our newly updated website at http://www.kazatomprom.kz

All statements other than statements of historical fact included in this communication or document are forward-looking statements. Forward-looking statements give the Company’s current expectations and projections relating to its financial condition, results of operations, plans, objectives, future performance and business. These statements may include, without limitation, any statements preceded by, followed by or including words such as “target,” “believe,” “expect,” “aim,” “intend,” “may,” “anticipate,” “estimate,” “plan,” “project,” “will,” “can have,” “likely,” “should,” “would,” “could” and other words and terms of similar meaning or the negative thereof. Such forward-looking statements involve known and unknown risks, uncertainties and other important factors beyond the Company’s control that could cause the Company’s actual results, performance or achievements to be materially different from the expected results, performance or achievements expressed or implied by such forward-looking statements. Such forward-looking statements are based on numerous assumptions regarding the Company’s present and future business strategies and the environment in which it will operate in the future. THE INFORMATION WITH RESPECT TO ANY PROJECTIONS PRESENTED HEREIN IS BASED ON A NUMBER OF ASSUMPTIONS ABOUT FUTURE EVENTS AND IS SUBJECT TO SIGNIFICANT ECONOMIC AND COMPETITIVE UNCERTAINTY AND OTHER CONTINGENCIES, NONE OF WHICH CAN BE PREDICTED WITH ANY CERTAINTY AND SOME OF WHICH ARE BEYOND THE CONTROL OF THE COMPANY. THERE CAN BE NO ASSURANCES THAT THE PROJECTIONS WILL BE REALISED, AND ACTUAL RESULTS MAY BE HIGHER OR LOWER THAN THOSE INDICATED. NONE OF THE COMPANY NOR ITS SHAREHOLDERS, DIRECTORS, OFFICERS, EMPLOYEES, ADVISORS OR AFFILIATES, OR ANY REPRESENTATIVES OR AFFILIATES OF THE FOREGOING, ASSUMES RESPONSIBILITY FOR THE ACCURACY OF THE PROJECTIONS PRESENTED HEREIN. The information contained in this communication or document, including but not limited to forward-looking statements, applies only as of the date hereof and is not intended to give any assurances as to future results. The Company expressly disclaims any obligation or undertaking to disseminate any updates or revisions to such information, including any financial data or forward-looking statements, and will not publicly release any revisions it may make to the Information that may result from any change in the Company’s expectations, any change in events, conditions or circumstances on which these forward-looking statements are based, or other events or circumstances arising after the date hereof.